BlockFi Has $355M in Crypto Frozen on FTX

FTX Crash sends Shockwaves through the Market, including the Esports Industry

FTX has been on everyone’s lips following its recent bankruptcy, as the aftermath of the events has spread in the crypto space and also started to impact other industries, such as esports.

On November 11, former FTX CEO and founder Sam Bankman-Fried officially resigned and left his company in uncertain territory. In just a few days, FTX has managed to fall from being one of the biggest crypto exchanges in the world to now being number 230 for FTX US and 237 for FTX on Coinmarket’s top crypto exchange list.

With a big company like FTX falling seemingly from one day to the other, it has been enough to send shockwaves through the crypto market, which was already in a vulnerable spot. Not only has the FTX crash affected thousands of people’s assets, left former employees without a job, and more, but it has also spread into the esports industry, where FTX had big active sponsorships.

On November 8, the world’s largest crypto exchange Binance attempted to acquire and help the sinking FTX ship. One day after, Binance announced that the deal was off following a review of FTX’s financial documents. This ultimately led to the inevitable fall of FTX, which we are now starting to see the effects from.

While the crypto market, and FTX customers especially, are trying to recover from the recent events, certain parts of the esports industry are doing the same.

Little did TSM know, at the time, that this deal would be disastrous a little more than one year after, as it is now falling apart. Shortly after the FTX news, TSM released a statement saying it had suspended its partnership with FTX immediately. 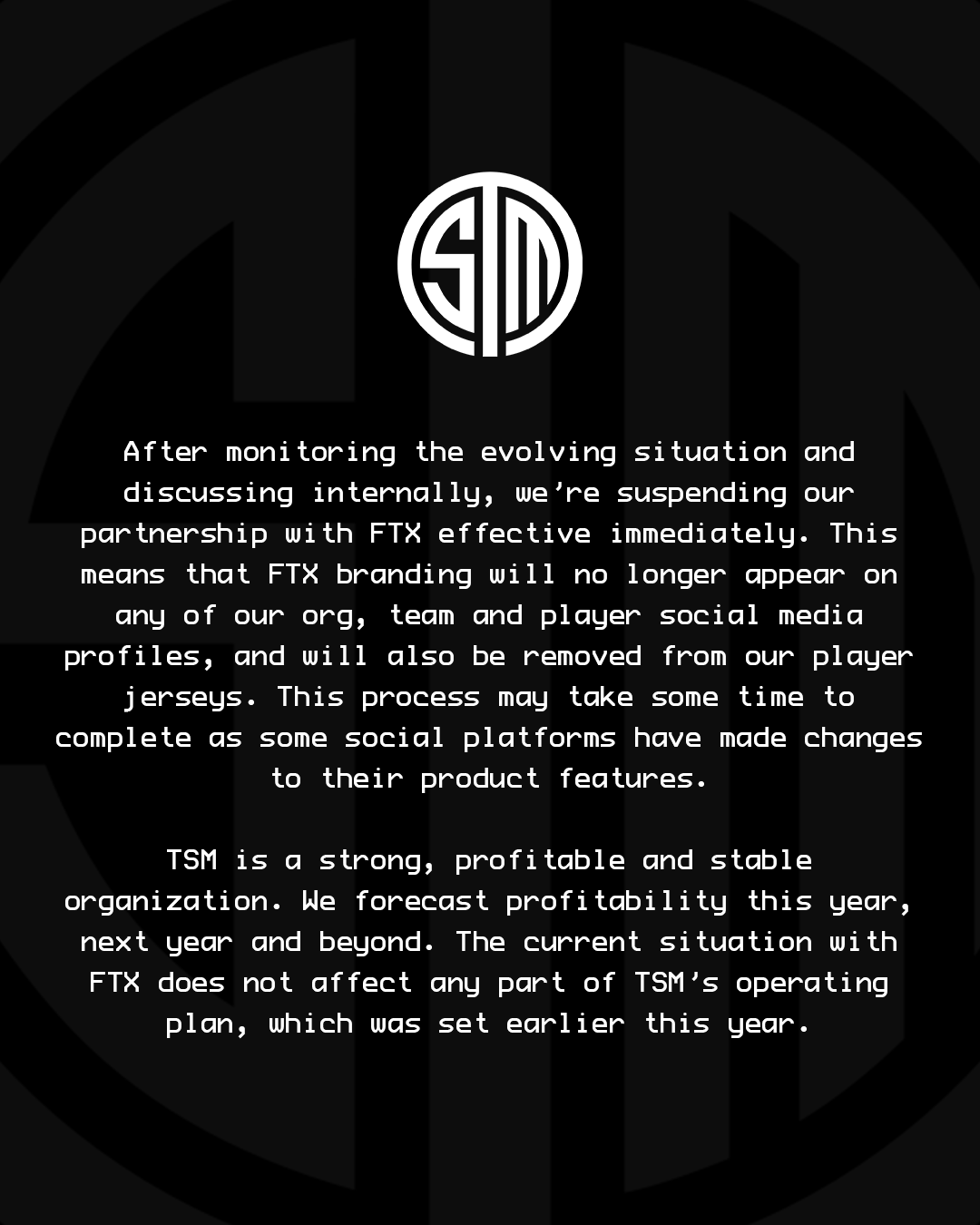 In the statement, TSM points out that FTX branding will no longer appear on the organization, teams, and players’ social media platforms. The branding will also be removed from their jerseys moving forward.

“TSM is a strong, profitable, and stable organization. We forecast profitability this year, next year, and beyond,” TSM said in the statement. “The current situation with FTX does not affect any part of TSM’s operating plan, which was set earlier this year.”

FTX crash could be another trigger to a shaky esports industry

It sounds like TSM will ride out the storm and still be okay. If that is entirely true is hard to predict, even when the organization is optimistic.

The esports scene, in general, is in a dangerous place, just like the crypto market. Many organizations are cutting their budget for 2023 as everyone continues to rely on sponsorships and investor money. Not being able to run profitable businesses organically is a constant worry in esports and has led to many speculating that the industry is in a bubble.

TSM isn’t the only organization affected by the FTX crash and the only one that is dependent on sponsorship revenue. Last year, FTX signed a deal with North America’s biggest League of Legends league, LCS.

The deal made FTX the official cryptocurrency exchange partner of the LCS in a seven-year contract. A third example is the Brazilian esports organization FURIA, who signed a one-year sponsorship agreement earlier this year worth $3.2. Luckily for FURIA, the deal was on a smaller scale, but the consequences could still turn out big.

Crypto and esports can still go hand in hand

These are examples of FTX partnerships in esports, but it’s by no means all crypto partnerships that exist. Crypto-related partnerships are generally growing in the esports industry, and the two fields have started to work closely together every year.

Even though the FTX crash is an excellent example of how two volatile industries can impact each other negatively, it’s not enough to make conclusions. The crypto space has helped esports grow further during the past years and is involved with a lot of money.

The same goes the other way, as esports positively impacts Web3 and crypto-based games. It’s only a matter of time before we see explosive growth in Web3 games and esports.

Moving forward, we will likely see more careful partnerships but with recovery comes renewed hope and further growth. To stay up to date with the crypto market and what’s moving, keep an eye on the BingX blog.

Disclaimer:  BingX does not endorse and is not responsible for or liable for any content, accuracy, quality, advertising, products, or other materials on this page. Readers should do their own research before taking any actions related to the company. BingX is not responsible, directly or indirectly, for any damage or loss caused or alleged to be caused by or in connection with the use of or reliance on any content, goods, or services mentioned in the article.