Web3: What It is and Why it is Important

Web3 describes a new age of the internet built around the concepts of decentralization and giving users more control over their data and the platforms they use.

If you are active on social media, chances are you have come across the ‘Web3’ buzzword. And maybe you’ve seen it used alongside ‘crypto’, ‘Metaverse’, ‘DAOs’ and you’re wondering what all the hype is about.

The current internet as we know it (Web 2.0) is controlled by a handful of large tech companies deciding the rules. This monopoly of control is what Web3 is trying to solve.

Web3 is a permissionless, token-powered internet where crypto is the new money and users decide on how the platforms they use work.

Now, many advocates say Web3 will be our reality in the next decade while critics say it’s just another marketing buzzword. While no one can say for sure yet, the concepts behind Web3 are already shaping the world today.

In the rest of this piece, BingX takes you on a short trip back in time to the history of the internet, the problems Web3 aims to solve, and why we should all look forward to the future Web3 promises.

The internet as we know it today is very different from what it was just ten years ago and even more from when Tim Berners-Lee first invented the World Wide Web (www) in 1989.

And most content creators were web developers and programmers who simply created content for you to read.

Then came Web 2.0 – the internet of today… the read/write, user-interactive web.

Now, users have so many tools to create their own websites and make their own content without needing to code. Plus, with social media, you can now create, edit, and share content with an audience who can also comment and give input. Mobile phones and their mobile apps have also made Web 2.0 flourish – you can order your favourite pizza, book a ride on Uber, or find a date online. 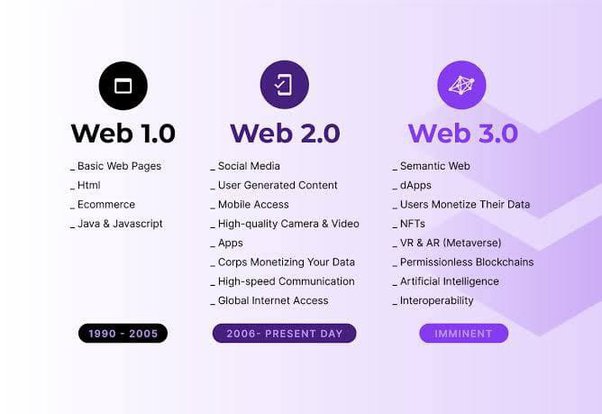 Well, only that it isn’t all that good. One word… ‘Control’.

The tech world as we know it is dominated (and in loose terms, controlled) by a few Silicon Valley companies – Alphabet (owner of Google), YouTube, Meta (formerly Facebook), Amazon, Microsoft, Apple, Tesla, and Netflix.

In fact, there’s an acronym for five of them FAANG – stands for (Facebook, Apple, Amazon, Netflix, and Google) usually called the “Big Five”.

Almost everyone uses an iPhone, has a Netflix account, watches YouTube, buys stuff on Amazon, and you probably found this post on Google. You probably have Facebook and Instagram accounts (owned by Meta). Plus, most devices on the planet, your phone, tablet, or PC, have parts produced by Microsoft in them.

These products are so woven into our daily lives that we can almost not do without them. And most businesses depend on these platforms to connect with their customers.

This monopoly of control has caused more harm than good.

These companies reserve the right to decide who uses their platform and can block access to anyone at any time.

Also, some of these companies have had histories of using users’ sensitive data in the past. Facebook was sued and fined in 2019 for selling out user data to another company for targeted political campaigns.

This puts everyone, and literally almost the whole world at their mercy.

These are some of the issues that Web 3.0 promises to solve.

Why Web3 is Important

Web3 aims to solve the data monopoly problem in Web 2.0. These are some buzzwords you’ll be seeing more often soon that define the reasons why Web3 is important:

Web3 is permissionless. In the internet of the future, anyone will be able to get on the internet and use any platform they want without needing the permission of an overseeing entity.

Think about what crypto is doing to money today – anyone and everyone around the world can make transactions and exchange value directly, and not need to go through an overseeing financial institution… that’s exactly what Web3 is trying to do for the internet as a whole.

NFTs (non-fungible tokens) are an essential part of Web3. They allow people to have absolute ownership over digital assets and anyone over the internet can verify that you own the said asset.

In today’s world, let’s say you play online games and have an impressive collection of in-game items and weapons. If the gaming company closes your account, you lose all these items.

In the Web3 universe, you can mint these items into NFTs and not even the game developers can take them from you. And you can even sell them on an NFT exchange if you want.

And whether it is in-game items, digital art, or deeds of physical assets like proof of ownership of your house, in Web3 (and even now), you can mint these into NFTs.

Web3 Gives Users Control Over the Platforms They Use – DAOs

Web3 promises to revolutionise the way companies are built through the concept of Decentralized Autonomous Organizations (DAOs). In plain English, you will be able to vote on how the platforms you use should work by owning tokens (similar to shares) in the company.

For example, in the Web3 version of Instagram, you’ll be able to vote on whether an update should be made or the kind of data that should be collected.

Everyone can be involved and have a say and not a single entity deciding the rules.

The concept of tokenizing platforms and companies also means that founders can make money quickly. Similar to the way cryptocurrency projects today do an initial coin offering (ICO), the equivalent of an initial public offering (IPO).

The founders can mint tokens native to the project and make a large percentage available to interested users and investors who can buy the tokens. Once these tokens start to gain value, the founders can now trade them for actual money.

Wondering what money we’ll use in the future of the internet? It’s already here – crypto.

Web3 builds on blockchain – the technology behind every cryptocurrency like Bitcoin or Ethereum, and transactions will be permissionless, fast, and borderless, and won’t be controlled by any financial entity.

All you have to do is create a wallet and you’ll be able to send crypto to another wallet anywhere in the world, instantly.

You can send crypto from a wallet on one platform to another wallet on another platform with just the wallet address.

Many experts believe that in the Web3 universe, we’ll be able to use one blockchain identity (eg tied to a wallet address or NFT) to login into different platforms.

So, you won’t have to create new accounts and give your details afresh each time you want to sign up on a new platform.

What Does Web3 Have to do with the Metaverse?

Now we know all the good stuff Web3 promises but what does it have to do with the Metaverse?

They work hand in hand.

The Metaverse is a futuristic virtual world where we will socialise, play games, work, entertain and learn.

If you’ve seen “Ready Player One” – the movie, then you have an excellent idea of ​​the Metaverse.

Now, Web 3.0 is how we will keep things connected in the Metaverse. Real people will likely want to keep their identities hidden behind their avatars, and blockchain, the building block for Web 3.0 is impossible to hack.

A look into the world and characters in The Sandbox. Source: WWD.com

Web3 promises a shift in the way the internet and the whole world work. We are now more connected than we’ve ever been in the whole of human history and we have the big tech companies to thank for that.

However, this has also created a data monopoly that leaves us at the mercy of these companies.

Web3 aims to solve that and give users control over their data and the platforms that are essential to their lives. And while the ideas behind Web3 are still mostly theoretical, it’s evident that no one wants to miss out on the next big thing.

Many advocates swear that Web3 is the internet of the future, while others say it’s just another bubble that’ll burst soon, and some are on the fence. However, whether it’s the preachers of Web 3.0 or its critics who are right, the possibilities are exciting.

Learn Web3 and More on BingX

You can learn more about Web3 and other related topics on BingX , the world’s leading social trading platform.

If you are a new crypto trader, using  BingX copy trading , you can copy the strategies of elite traders with many years of experience and start earning right away.

Disclaimer:   BingX does not endorse and is not responsible for or liable for any content, accuracy, quality, advertising, products, or other materials on this page. Readers should do their own research before taking any actions related to the company. BingX is not responsible, directly or indirectly, for any damage or loss caused or alleged to be caused by or in connection with the use of or reliance on any content, goods, or services mentioned in the article.